Graffiti is a fact of life in any urban area. While it can reach the level of art, as demonstrated by Banksy and Roa: 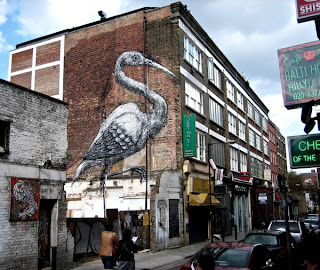 Sacred Crane by Roa on Hanbury St. (from Spitalfields Life) 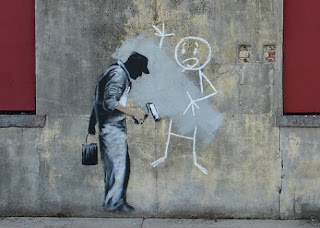 Banksy in New Orleans, (from WebUrbanist)

Or display a level of verbal/visual wit as I have noted in earlier posts, much of it is more comparable to this: 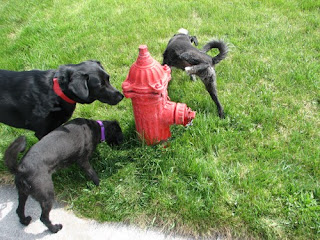 Which is why I was so disgusted to find this on my front doorstep one recent Saturday night returning home from NOWFE: 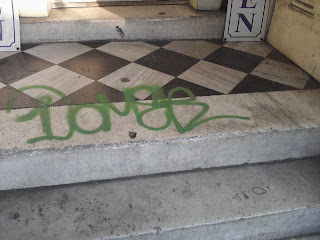 One design issue with my building is its gracious vestibule open to the street, which can lead to vagrants camping out in inclement weather (I try to think of them as ornamental hermits), various musical performers, and random people having a smoke with their coffee from across the street. It recently gave shelter for about 30 seconds to the above tagger.

This was done sometime before 11:00 pm on a Saturday night on a holiday weekend, on a very busy pedestrian street (police?). It was also done on marble and rare white granite (the quarry closed about 5 minutes after these steps were installed in 1858, and the dead stock used up shortly afterwards). In general I understand that graffiti can be a justifiable release, which is why many cities have places like the Banksy Tunnel in London. Unfortunately, the Grey Ghost, a local anti-graffiti vigilante (see image #2), managed to convince City leadership that every skate kid who saw Beat Street one too many times is evidence of a growing gang conspiracy. With no legitimate outlet, historic buildings get tagged. (I'm trying to put the kindest spin on things now: my immediate reaction was a desire for a more violent resolution.)

A quick test with soap and water just spread paint chips around, so I decided to call in the big guns. My post-Katrina job at FEMA left me with a good contact list for historic specialists, among them my friend Mark Soeth, a masonry conservator residing in upstate New York (Katrina drew deeply from national talent in the early part of the disaster). He promptly replied with a list of suggestions, particularly Prosoco products. As it was a holiday weekend, all stores were closed, as was the Vieux Carre Commission - all exterior work in the quarter must get VCC permits, leading to the famous assertion that  the VCC controls paint colors in the Quarter (while there IS a list of pre-approved colors, they'll approve any color if you ask nicely).

I contacted a staff member at the VCC, who explained that they had to get guidance from the National Park Service on the matter (the Vieux Carre is a National Historic Landmark District, so the NPS takes special interest). Unfortunately, their contact was on vacation/ extended conference duty. I was busy with work anyway, so I just checked in from time to time, finally getting an answer two weeks later (which closely followed my friend Mark's advice). At which point all local distributors of Prosoco told me it was a special order, with delivery in about a week or 10 days!

My landlords were losing patience, and various tenants had already tried hardware store paint remover with predictably poor results. Fortunately, my next door neighbor Mercedes had a suggestion: 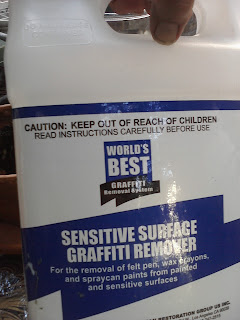 And not only a suggestion, she had the material at hand, which she was happy to lend. It turns out that the French Quarter Business Alliance and VCPORA participated in an anti-graffiti clean sweep a year or so ago (I was out of town), and the above solution was VCC-approved - they just forgot about it (they're very understaffed and frantically busy). It has the same active ingredient (ascetic acid) as Mark's suggestions. After about a half-pint of this stuff applied with a nylon bristle brush and about 2 rolls of paper towels (and a wash down afterward with a borate solution to neutralize the pH), this was the result: 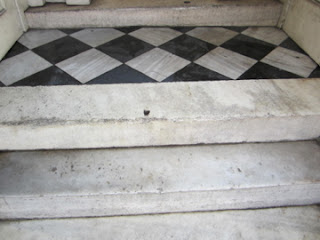 After paint removal, 150 years of filth is still intact!

On problem with graffiti is that removing it often just provides a fresh canvas (as the Grey Ghost discovered).  Fortunately, my doorstep is also the entrance for a beloved and busy local institution, Fifi Mahoney's, so general outrage was broadcast throughout the neighborhood, perhaps even to the perpetrator, who might be a patron of another nearby business not to be named. We shall see.

Ok, I am very late to the party, having just read this post. It's incredible that you were able to remove the paint! Holy cow.