My Balcony in the NYT! 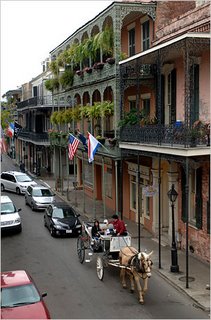 This is from an article in the NYT a month ago; I downloaded the image during Thanksgiving and it sat on my sister's desktop in Kaintuck for a month. The building dates (far right of picture) from 1859, and is probably what rightly should be called the Beauregard House: PGTB lived here for several years after the war (I'm not sure whether he owned it or not - I'll have to check the title chain at the HNOC), not the several months he lived at the house on Chartres St that bears his name. But then my building didn't have the luck to be restored by a lady who wrote fanciful historical novels; instead it became something of a tenement, divided into a series of one bedroom apartments, which was ultimately to my benefit. While I have a million-dollar balcony (gallery, actually), the apartment is rather modest. My old apartment across the hall was honestly a nicer apartment - refinished floors, a decent sized kitchen (with a dishwasher), and great morning light, but it lacked the balcony. The place needs a bit of work: I've started with the floors - down to the tongue in the living room, so they'll have to be chemically stripped. Then the next step will be redoing the bathroom (new tile). I suppose that the floor of the balcony should be repainted while I'm at it...

All of this will have to wait until I return to NOLA, which should be Wednesday; I'm still in Kentucky suffering from a cold - perhaps I will be in a state to drive back down tomorrow. As far as my reading, not much of that, just watching movies with my sister.
Posted by the quarter rat at 10:02 AM No comments:

My Balcony, with Etta 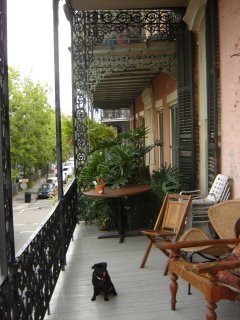 At the left is my balcony, complete with my dog, Etta. People who live in the Quarter all know Etta, while I'm just known as her walker. The picture was taken in September, roughly a week after I took possession of the apartment; since then I've added to group of plants and furniture. The split-leaf philodendron was inherited - it used to always wind up in my old apartment down the hall during hurricanes.

Right now my life revolves around my job, walking Etta and what I'm reading. Since I work for the government (meaning I really shouldn't discuss work, not that it's that interesting) and dog-walking is very repetitive, I'll discuss what I'm reading....

Currently reading:
Memoirs of the Duc de Saint-Simon (vol 1 of 3)
The gossipy account of life in the court of Louis XIV through the Regence of Louis XV and finally his Royal Court. Similar to Pepys's brush with fame, but Saint-Simon is not quite the amusing scamp as Pepys (he is just a little to concerned with good friars for my preference). Definitely an ongoing project.

The Sitwells, A Family's Biography - John Pearson
Literary gossip, a guilty pleasure because I'm only familiar with Facade.

In the wings:
Pages from the Goncourt Journals - Edmond and Jules de Goncourt
More guilty pleasure, but then I'm going to visit my family for the second time in 2 months. It's still better than reading old issues of Star.

Put down to be picked up later:
A Spot of Bother - Mark Haddon
The Natural Disorder of Things - Andrea del Cannobio
Posted by the quarter rat at 4:57 PM 2 comments: