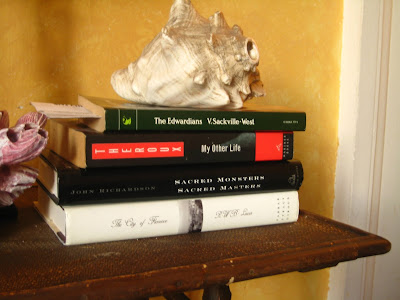 The Edwardians, Vita Sackville-West
A slightly fictionalized account of life at Knole (Chevron in the novel) at the height of the Edwardian period. Probably her best novel.
My Other Life, Paul Theroux
A work of fiction with the attributes of an autobiography - the main character is named Paul Theroux and has written books with the same titles (My Secret History, The Mosquito Coast, etc). In this book he has such experiences as giving poetry lessons to an arms dealer in Singapore, fending off advances from wealthy literary groupies, hosting a dinner with a drunken Anthony Burgess and a ridiculous bibiomane, being interviewed by someone who appeared in The Great Railway Bazaar (and was unhappy with her portrayal), and receiving life-advice from QE II, which leads to him writing The Happy Isles of Oceana.
Sacred Monsters, Sacred Masters, John Richardson
Scurrilous gossip about the great, the good, and their pilot fish. Intensely entertaining. With phrases like " a libido like an electric eel" (describing Dali's horrendous wife Gala), he approaches Vidalian levels of wit and erudition, especially when he writes about artists and their hangers-on. His descriptions of Armand Hammer and Dr. Barnes ("The Beastly Dr. Barnes") are priceless, and his portrayal of Andy Warhol's secret (he was intensely religious) is very touching. There's also a very good essay about poor Mario Praz.

The City of Florence, Historical Vistas and Personal Sightings, R.W.B.Lewis
I'm about halfway into this one. I don't know why I bought it - I've had a distaste for Florence ever since the Great Gelato Incident of 1998. Perhaps it's time to forgive and forget.
Posted by the quarter rat at 12:11 PM No comments: