Last Nice Weekend for a While

I love the period between Thanksgiving and Christmas in the French Quarter. It's usually pretty quiet. There was a Saints game in town today, but the Who-Dats were relatively silent. Except for an idiot in LSU facepaint screaming that under my balcony Saturday morning while I was watering plants. 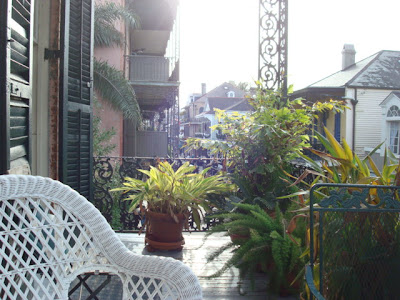 Everything is getting a little yellow and it's time to start trimming. The canna behind the metal chair blooms until the week before Thanksgiving, so I always give it some TLC before I cut it down to the dirt when I have to bring it in for winter. 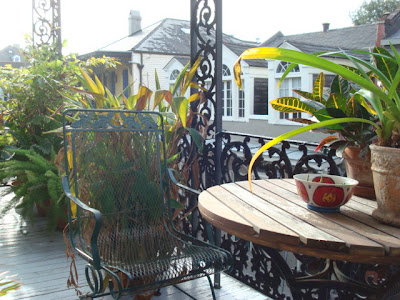 The croton and amaryllis were inside on my writing table, but I thought I'd give them one last fling before spring. I finally found my paperwhite bulbs from last year, and they're soaking in the little bowl. 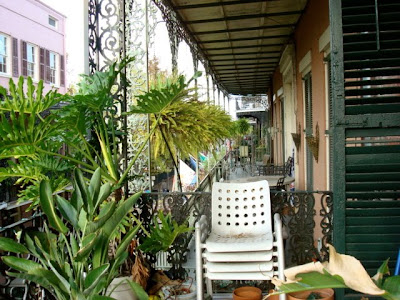 My neighbors' ferns are looking a little worse for wear. It's been a dry summer/fall and they've neglected to maintain their automatic sprinklers. 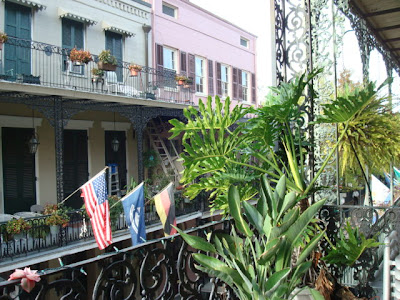 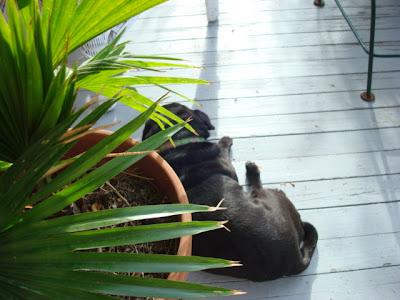 If there is a ray of sun outside, Etta is there, even if it's freezing (for a while, anyway). I'm home today working, getting the last of my balcony time before a front comes through tonight and finally brings winter. Until it warms up to 70 again in a couple of weeks...
Posted by the quarter rat at 9:11 AM No comments:

Oops! I thought it was a 2nd line for Coco Robichaux, but instead it was a birthday parade for WWOZ. Oh well. 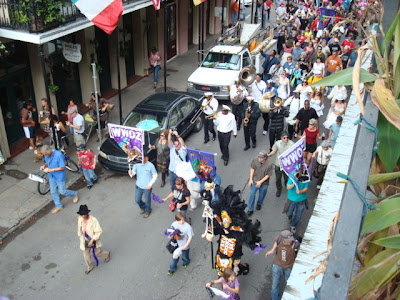 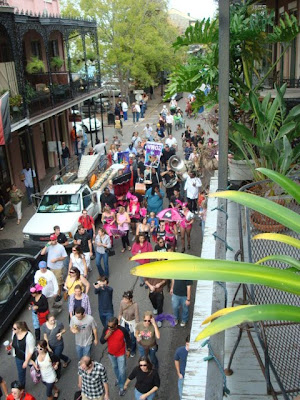 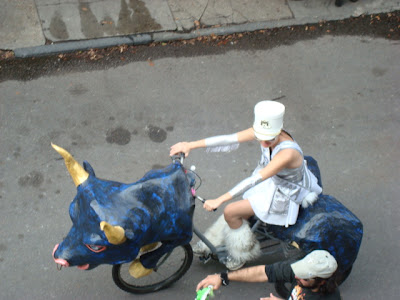 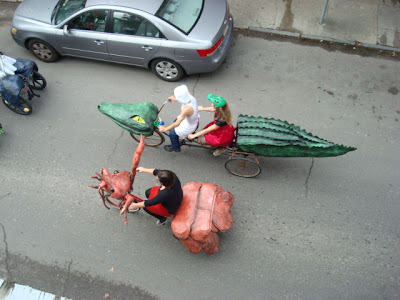 Yes, we do things different down here. RIP Coco.
Posted by the quarter rat at 12:42 PM No comments:

The View from My Office 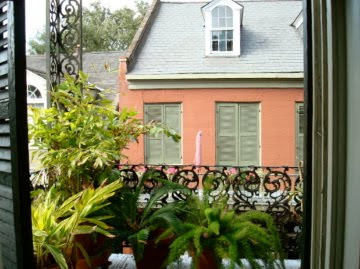 Lately I've been quite busy sending out resumes, responding to RFQs (requests for qualifications) and brushing up on my CAD skills. My current contract is winding down, but that's the nature of consulting. There are many opportunities out there, some in NOLA, some out in the Great Elsewhere. Until these materialize, I'll enjoy the view from my worktable in my bedroom.
Posted by the quarter rat at 12:16 PM No comments:

With both parents in their 80s, I come home for ALL major holidays. My parents are both relatively healthy for their age, but things change quickly at that age (sometimes it's like a sad version of watching a toddler grow up) and I don't want to regret missing time with them. I love to come here in the summer, when everything is green and alive, but the holidays are bittersweet, with many quotes from the Book of Better Days.
After a busy morning helping cook Thanksgiving dinner, eating Thanksgiving dinner, and finally cleaning up the good silver and china we use for Thanksgiving dinner (no dishwasher for these), I decided to take a walk, and finding my camera in my jacket pocket, took the only non-New Orleans photos on this blog. We've owned the farm since the turn of the last century, and various branches of my family have lived in the general area since Kentucky was part of Virginia. 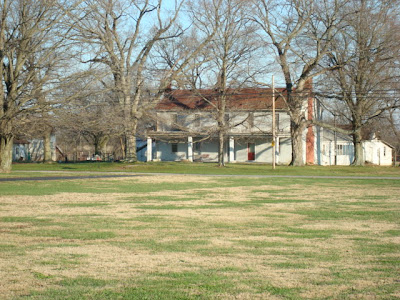 This is the house we always refer to as my grandmother's house (I grew up in a comfortable 1960 bastard-colonial ranch across the road, where I'm writing this post), although my great grandfather bought the place. The original part of the house (on the right hand side) was a hall and parlor house built in 1835 that may have replaced an earlier house on the site. The house grew over the years until it arrived at its current configuration shortly before my family bought it.
My grandmother grew up here and later presided over a farm, children and numerous grandchildren. My father was born here, a late 7th month baby whose doctor didn't bother to weigh him; his 82nd birthday is in a couple of weeks. Alas, the only people who seem to be interested in the house (like me) live elsewhere, so the house has fallen into a sad decline - my grandmother died in 1986 and not much work had been done to the house for many years before that. 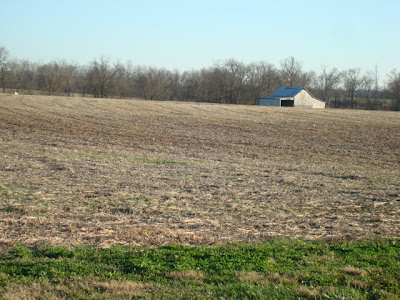 Behind the house are a series of fields and pastures. The dairy barn is now used to board horses, but there are several tobacco barns like this that are still in use, even after the end of tobacco price supports. In the summer this field was planted with soybeans and looked like a rich green tapestry when I visited in early July. It will soon be planted with winter wheat, and when I visit my family after Mardi Gras we'll see the acid green shoots coming out of the dark earth.
If the weather holds, I'll take more pictures of my lovely hometown as the weekend progresses.
Posted by the quarter rat at 3:37 PM No comments: 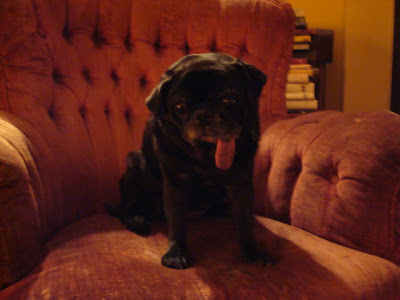 We're both getting a little grey...
Posted by the quarter rat at 5:44 PM No comments:

All the Images, None of the Text 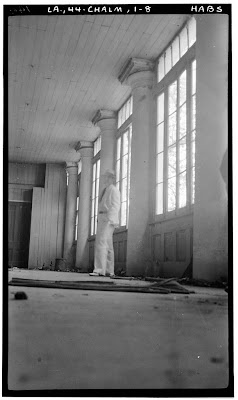 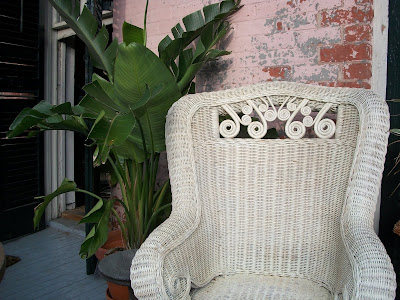 Actually, I was here all along.
My first long silence was the result of simple lassitude. This time, it seemed like the universe conspired to quiet my voice.
No, I wasn't in jail.
Shortly before my last post - in September '09 - my elderly Mac finally died, leaving me with only an iPod Touch for recreational internet. While I'm quite sure that there are people who can manage to post on Blogger using such devices - today at lunch (Satsuma Cafe in the Bywater) my friend Donovan informed me that Kar Wai Wong is shooting a movie with an iPhone - such ingenuity was beyond my ken. Then shortly after my last post, which was done on a work computer during lunch, every computer on our network was infected with vicious spyware (less from my intermittent blog posts than from everyone's addiction to Facebook and YouTube), ending all recreational internet at work. For a while, anyway.
Then I changed jobs. More money (a little), more stress (a lot), and an even tighter firewall, so no blogging and not much internet. I filled the gap with the printed word and my reading pace got back to grad school levels.
And my office is now at the lakefront. Where my old commute was 6 blocks, my new commute is 6 miles, so a car was in order (more on that later). This and other random expenses (and extravagances) compounded to keep me away from the Apple Store. Until now.
I also went through a period where I suspect that I wasn't very much fun. Stress at work was a major factor, as was an illness in the family (which showed me how trivial my other problems really were). Since I didn't have much to share beyond predictions of impending disaster, I kept my counsel. Fortunately both situations are currently in abeyance and I've returned to my usual sunny disposition. And I have observations to share.
But not tonight. My drink is empty, and it's time to go to bed. 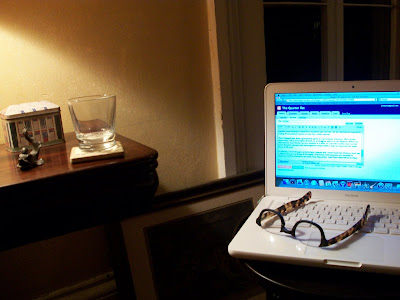 Posted by the quarter rat at 10:59 PM No comments: